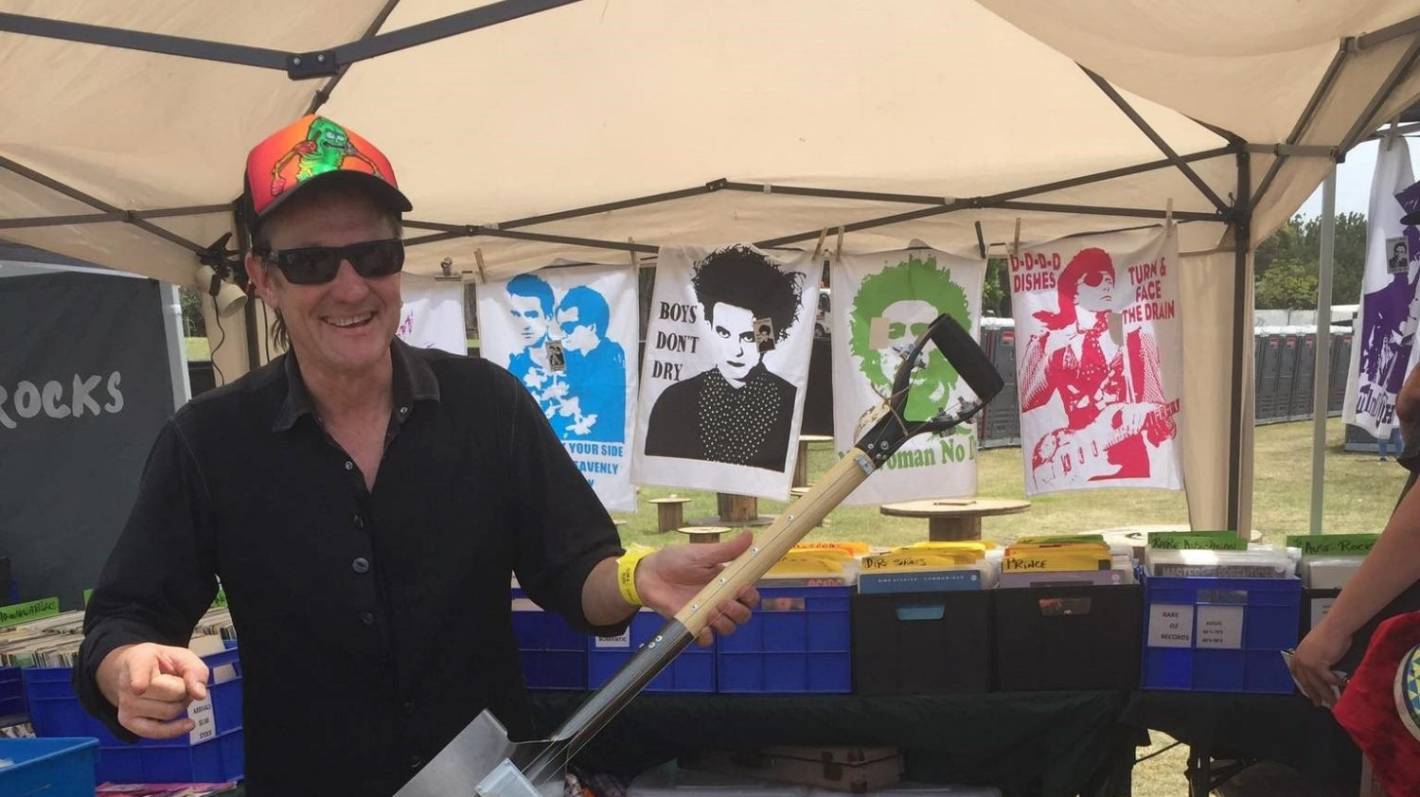 Riccarton Rotary spokesman Craig Murphy said the Sunday market was one of the longest-running in New Zealand and had '’helped a lot of people’’.

''It's a charity market so everything we earn goes to charity. Rotary doesn't charge entry or for parking.

“We have raised $3.7 million dollars over the 31 years, which goes back into the Christchurch community, from the Salvation Army to the City Mission, St John, 0800 Hungry, Hohepa House, school sports, Outward Bound, you name it.''

Riccarton Sunday Market manager Sue Rowe said the market had been on its present site behind Riccarton Racecourse for 20 years.

‘'One woman who is 80 now, she never misses a Sunday. She's an artisan selling hand cream – she's been with the market for 30 years,'' Rowe said.

The market started as a car boot sale at Riccarton Mall when there was no Sunday trading. 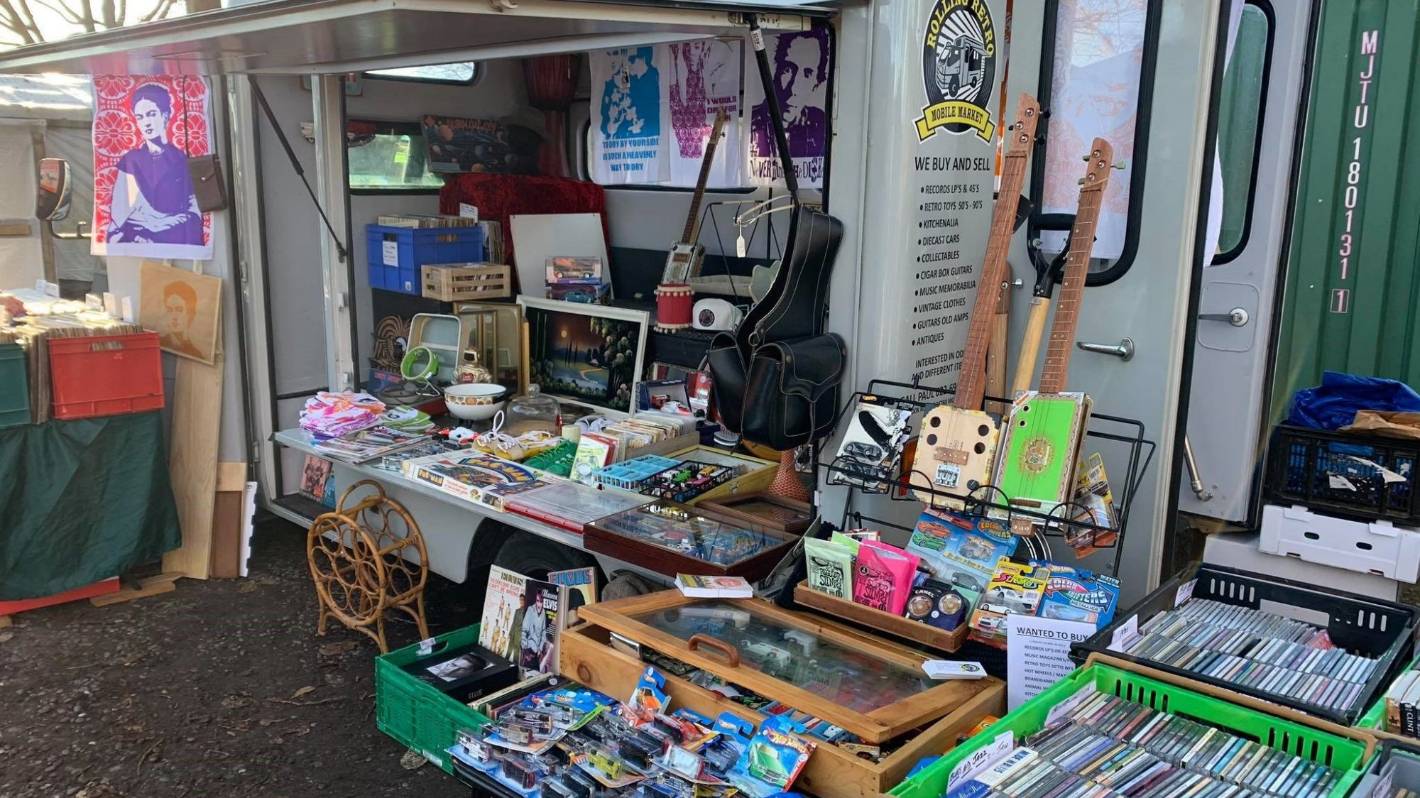 Paul Allen, of Rolling Retro Mobile Market, is just one of many stallholders at the popular Riccarton Sunday Market. He sells rare and collectable records, vintage toys and ''odd and different items'' include guitars made from cigar boxes and shovels.​

‘’After that it moved to Bush Inn, then Riccarton High School, then the university and then it came here,'' Murphy said.

''Some people would look at some of our stalls and think ‘junk’, yet for other people that is exactly why they come, the secondhand tools and goods. It has a far broader audience than a farmers or craft market.''

Some people had been ''confused'' and thought the market had closed because of the construction of the neighbouring Ngāi Tahu Karamū subdivision, he said.

In more than three decades, it had closed only ‘’a handful of times’’.

''Before we had only shut a couple of times because of flooding... Every Sunday we are here and, with level 2, we are still here but doing contract tracing and QR codes,'' Murphy said.

''The land sold for the subdivision ends at around the start of our food court area. We just recently signed a lease here for another 30 years.

“For many stallholders this is their livelihood. A lot of them are artisans and what they sell is made or produced here in Canterbury.'' 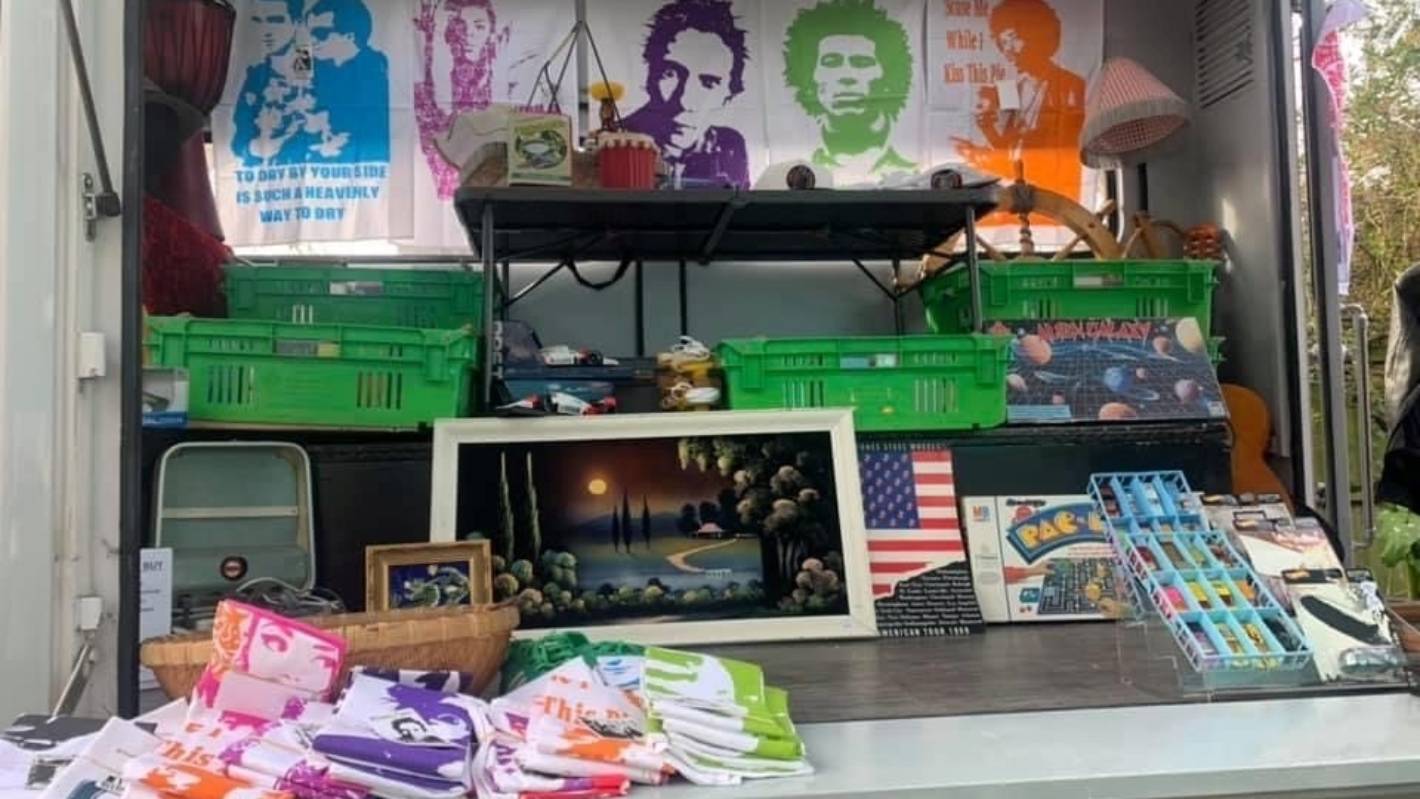 You never know what you might find at Christchurch’s Riccarton Sunday Market.

A tea towel with an outline of Morrissey's glum face is framed by the words “To dry by your side is such a heavenly way to dry”. It is hung behind a box of collectable 45-inch records and a shovel that has been transformed into a guitar.

Allen was involved in high-end rockabilly and retro markets around Australia, and for 30 years he and his wife, accomplished artist Jo, travelled annually to attend the Riccarton market. They moved to North Canterbury's Leithfield Beach permanently 18 months ago, and now Allen is a stallholder too.

‘’Only two people in the world make the shovel guitar,’’ Allen said.

''One of them is my mate, Adam Harrison. He runs  in the Blue Mountains and ships them over here. He makes cigar box ones, too.''

Obligingly, Allen plugged the shovel in and

The rock ‘n roll-themed tea-towels were the last lot made under the Plum Jam label in New Zealand, he said. Behind him, one reads “Never Mind the Dishes”.

It's Allen’s first time as a stallholder at Riccarton. With an eye for rare records, toys and retro goods, he and his van will be at the Revamp Vintage Market on August 30 at the Wigram Air Force Museum, the Christchurch Art Gallery monthly Wednesday night market and, later this year, Rangiora Muscle Car Madness.